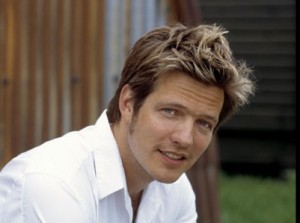 Thomas made his first short film at the age of 16 and was admitted three years later to the National Film School of Denmark, thus becoming their youngest student ever. He graduated in 1993 with his short Last Round garnering a nomination for a Student Academy Award. He was catapulted to international fame in 1998 when his second feature, Festen, received the Jury Prize in Cannes, as the first film completed under the terms of the Dogme 95 Manifesto, of which he had been co-author alongside Lars von Trier.

In an interview taken on October 14 at Filmmakers Afternoon Tea, Mayfair Hotel, London, as part of the 2012 LONDON FILM FESTIVAL, Thomas reminisces about the “innocent days” of his first shorts:

Dana:”What is your relationship with the short form and how did you find the transition from making shorts to making features?”

Thomas: “I made three shorts before starting making features and I find that form very powerful. Unfortunately the weak point is the distribution, nobody sees them, which is why it is dying somehow, or at least it dies in the career, it doesn’t die in the world…But I find it as difficult and as powerful as a feature, maybe they’ll come back, I don’t know, it seems that things are getting longer, it’s the TV series now, which I also find very interesting. But I miss the days of the short film.

Dana: “Well, you never know, you might make another short one day…”

Thomas: “My graduate film, The Last Round.

Last round (Sidste omgang) from bonana on Vimeo. 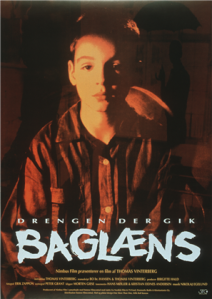 Thomas: Then I did another one produced by Nimbus and called The Boy Who Walked Backwards. To make good short film you have to be incredibly smart, as it is much more difficult to achieve the same dramatic effect in a much shorter span of time. Also there is an innocence, a purity about my short films which I lost since I started making features, and I’m attracted to purity. The short film can be so powerful, it’s a sort of no-nonsense form of the feature, so I like it…

Dana: “Any tips for filmmakers who make the transition from short to feature?”

Thomas: “Well, I’ve made so many mistakes, so how could I do tips? But what I think is interesting for me is, don’t follow the ideas that seem rational and right, the idea where you say to your friends “This is crazy” and your friends say “Ah, we can’t do that”, this is the one you should do (laughter).

Thomas: “The Hunt is about a small innocent society/village somewhere in the forest, with good-hearted people, lots of togetherness rituals, a hunting society and this man, male character who works in a kindergarten. One of the girls in the kindergarten is a very close friend’s daughter and slightly falls in love with him, in a non-sexual kind of way, of course, and he’s rejecting her a little bit, she gets angry and lies about it. It’s a sexual lie and a witch hunt begins. And he is ostracised from this society and hell breaks loose, orange turns blue and black. And I made a film years ago called Festen, this is sort of the anti-thesis to that movie, a mirror. So that is the movie. For me it is primarily a film about friendship, love, forgiveness, and primarily maybe loss of innocence. There’s all sorts of naked jumping into the river at the beginning, and there’s also fearful, hostile people”.

Dana: “It is a very challenging topic, and you are known for choosing very difficult, very controversial topics, what is your method of dealing with a subject like that, how do you handle it?”

Thomas: “It is also very dramatic, and it is true to say it was very difficult but also very fruitful as a writer to sit with, because there is a conflict and you can bring people and you can undress the characters through conflict. As a filmmaker, and I have made 20 films in my life.. I wanted to make it about something of importance, not morally speaking, not as a priest, but it has to be something…and I really felt that there was something in this, which made it a very uplifting process, a very joyful ride…”

Dana: “What is it like working with Mads Mikkelsen?”

Thomas:”Well, the first thing that hits you is that he is so strikingly beautiful, so that hurts a little, I wanted to dress his down and destroy his good looks, but then you learn that he’s such a friendly, giving, heroic team-player, he’s a huge enthusiast and very good, extremely good…I changed the character for him because he was more of a hero, strong man, man of few words, Robert de Niro kind of character in the script…and you notice when you see the film that we made him softer, we made him a school teacher, very humble, wearing glasses, and weak somehow, almost Christian, very forgiving, very patient…”

Thomas: “No, I wanted that, and he agreed on that as we were both inspired by that idea…I initially wrote it for Robert de Niro then Mads came on board and then I rewrote it for him. I always write for specific actors, also if they’re dead or something, there has to be someone…and Mads does not attach to any project without a script, so I couldn’t write for him, until he was attached…it was very complicated”.

Dana: “And what is it about him that made you think he would be particularly great for this role?”

Thomas: “Well, actually, there’s something very truthful in his acting, he’s very very realistic…besides from all the clichés that the camera really wants to look at him, he’s got a huge commercial potential and there’s also something very real about him. And I was curious to work with him, we’d worked in the same community for so many years without working together. And truthfulness is important in a film about lies, I guess basically the film’s theme is about how lies can spread, therefore everything was about making it as “naked” and as truthful as possible, and Mads completely fits into that, he’s born out of the 70’s attempt to make films in the street, American, Scorsese movies from the seventies when realism was reborn.

Dana: “And the little girl, it’s her big screen debut, how did you find shooting the more difficult scenes with her given her age?”

Thomas: “She was wonderful, there’s this child and…normally we say that working with animals and children is something you should avoid. In this case it was the other way around: the dog and the girl were just spot-on…And she was just incredibly good…And Mads and the other actors were, of course with a smile on their face, were almost intimidated by her…’cause she was just wiping the floor with them, every time, it’s incredible. We had a discussion whether to tell her about these matters or not, and of course she doesn’t understand sexuality, and should not, but we told her everything else. ‘Cause listen, we spit in her face and she was thrown around, she needs to know why…And this film is also a revolt against the over-protection and victimisation of children, so we thought, let’s talk to her like to an adult. And of course we agreed with the parents first, and it worked, she didn’t care, she was like, “ok fine, let’s shoot”, and then she did her ping-pong!

Thomas: “A very healthy girl. She was very good but she’s not going to do it again.”

Dana: “About the directing process, David Mamet says that it’s all about where to put the camera and what to tell the actors, would you agree? And do you have a certain method?”

Thomas: “I think that would be pushing it. I have a method, yes. If this is my movie, and this is where the actors have some dialogue, together with the actors, and the writer, I’m creating a big movie around them all. We talk a lot about the past, and not only about the immediate past, like what are you coming with, in the room,  did you just come from a fight, or from having sex, or…But what do they have together, rituals, what do they hide from each other, what are their dreams for the future, their plans. So what I always do is to work very hard and thoroughly with the actors, dialogue and rehearsals, and with the writer before we start shooting. And then we let go, to all the irrationalities, then we’re being charlatans. Because, hopefully by that time, we have solid ground to be standing on….if you can call that a method, that’s my method…and my actors seem to turn the way they want to, which is different from David Mamet. His method works very well though…”

Dana: “There’s an interrogation scene in the movie, with the little girl, where they quite literally put the words in her mouth, and I’ve read somewhere that this was based on a real transcript, can you tell me a bit about that?

Thomas: “Yes, it’s a police transcript, I’m not going to say which nationality because I don’t want to point fingers, I didn’t even want to point fingers at the police, but it’s from the 90’s, late 90s and they have improved, or at least they tried to improve…so I changed the scene to be some kind of interrogator, and I also took out a lot of very very ugly stuff, it was much much worse, and in all the cases it was much worse. You wouldn’t believe how much people put in children’s minds, how leaning the questions are…because they anticipate that the child…who wants to escape from it, because it is very unpleasant, therefore they sort of insist on this, and through that they implant false memories and they’ve done that in many many many cases. And I think that police is not doing a lot of that but the parents and a lot of kindergarten workers, they don’t know shit about this, they don’t know what to do, so they ask the same question to this poor child, and it becomes part of this child’s fantasy, and to satisfy the grownups they start inventing stuff…and again they end up as the victims, ‘cause they grow up to believe it, they grow up with the memory of having been assaulted without having been assaulted…so they grow up with a similar problem, similar needs, and they are violated by the overprotection, the fearfulness of our society…but in my film she appears to be a she-devil in people’s minds, which is not intended, because she was so nice, and she’s in love with him, so it’s an innocent love..and who wouldn’t be in love with Mads Mikkelsen?”

For an in-depth analysis of Thomas Vinterberg’s work, cinematic realism and Dogme 95, we recommend an article from the Film Journal. Click here to read it.