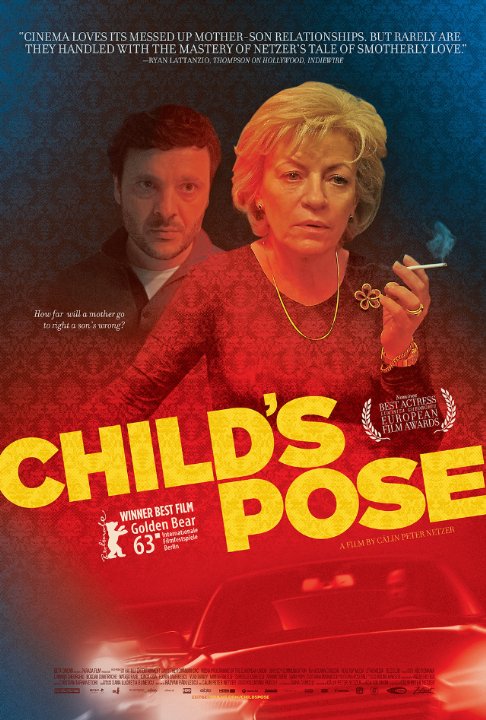 An ambiguous study of obsessive maternal love with a riveting performance by LUMINITA GHEORGHIU (4 MONTHS, 3 WEEKS AND 2 DAYS, THE DEATH OF MR. LAZARESCU, BEYOND THE HILLS) as a steely, well-off Bucharest architect determined to keep her 30-something deadbeat son, BOGDAN DUMITRACHE, out of jail after his reckless driving kills a child. How far will she go to convince the police, eyewitnesses and even the victim’s family of her son’s innocence? Offering a spendid blend of psychological realism and social commentary, Netzer’s third feature is a caustic look at the moral turpitude of the Romanian nouveaux riches.

Below is an extract from an interview with Romanian actor BOGDAN DUMITRACHE taken on December 1, 2013 at Curzon Soho as part of the ROMANIAN FILM FESTIVAL IN LONDON.

Dana: How did you prepare for the two amazing roles you played this year, the troubled Barbu in The Child’s Pose, a film that won the 2013 Golden Bear Award, and Paul, the anxious young director in Corneliu Porumboiu’s new film When Evening Falls on Bucharest or Metabolism. And which role did you enjoy playing more?

Bogdan: I enjoyed playing both roles. And I like both directors, although they are completely different. Whereas Netzer is a rather dogmatic and perfectionist filmmaker, who has a fixed script from the beginning that you can’t adapt or fiddle with, the text is not to be modified, nothing is to be changed, you need to come fully prepared on the day of the shooting[…], Corneliu didn’t work like that, his script was a pretext, a starting point from which we built the characters and the story together.

Dana: How did you find your role in  The Child’s Pose? I found it very shocking.

Bogdan: Yes it was shocking even for me and seen from the outside the role is most definitely shocking. I played a “paralysed”, blocked character in this film. This inner paralysis comes from a very simple sentence: when you can’t make any plans for your future because you don’t know what it will look like, maybe you’ll be in jail and you won’t have any kind of future, in that moment you succumb to an emotional and mental blockage in which you deny everything and you are practically a vegetable. Without too many thoughts. So from this point of view the role was not too difficult to play, the character was ultimately simple to understand: he was either blocked or in denial, and in both cases his frustration would be so overwhelming that he would start to behave aggressively.

Dana: The relationship with the mother is extremely dysfunctional.

Bogdan: Yes, it is a relationship that borders on the pathological.

Dana: And the mother is a very pathological being!Hence probably the son’s shocking behaviour. Were there discussions around the character, how was this character introduced to you?

Bogdan: I was lucky because Netzer did the casting for all the roles except my role. He approached me one evening at the GOPO Awards, he came to me directly and said: “This character is you, you’re playing Barbu.” Then we met up and discussed the script, the character…

Dana: Were you surprised by this character?What was your first reaction?

Bogdan: Naturally the first reaction was one of surprise: “She is his mother after all, how can he do and say all those things to her?Has he no sympathy, no remorse, nothing whatsoever?”. And Netzer said: “No, he hasn’t”. So I went: “Okay, let’s see where his feelings come from…”. And I had a very long time to prepare. Because I have a casting agency in Bucharest and I helped Netzer with the casting, I basically got to learn all the roles by heart.

Dana: Do you know anything about the writing of the script?

Bogdan: Netzer wrote the script together with Razvan Radulescu and the script is to a certain extent autobiographical, they both have pretty tense relationships with their parents, so that was the source of inspiration. We had many discussions in which they tried to explain the logic of this character, as much as they could, then I just used my imagination. My advantage was that I had eight months to prepare, so when we started rehearsals I knew the character inside out, and all the other characters. And Luminita is an excellent actor, you can play very well alongside her. And gradually I got to understand, to a certain extent, what happens there.

Dana: Would an incestuous reading of their relationship be correct?

Bogdan: Yes, of course, the film opens this problematic although it doesn’t develop it further. There is the scene with the glove where things are bordering on incestuous. Roughly speaking, it is a great mistake to wish for your children to become what you yourself failed to be. And when a parent does this, after living an unfulfilled life…

Dana: Is this the true reason why though?

Dana: There is also a disturbing element of dependancy on his mother…

Bogdan: Indeed, when things go beyond the limits of what is normal, Barbu doesn’t know how to stop himself, he can’t separate himself from his mother, despite everything he says and does. He swears at her, calls her names, make a huge scandal, but he is not capable to get himself out of it , to say “Stop”.