Shot without permission on the hectic streets of Tehran and co-produced by Jafar Panahi‘s brother Yousef — who also enjoys a fleeting cameo, Paradise is a quiet character study chronicling everyday sexism in today’s Iran. Blending real and fictional elements to create a complex, multi-layered narrative, the film centres on Hanieh, a disaffected 25-year-old schoolteacher who lives with her married sister and commutes long hours each day to get to work at a school on the outskirts of Tehran. Sensitively played by Iranian visual artist Dorna Dibaj, the only non-actor in this cast, Hanieh seems to observe Iranian society  with fresh eyes, a freshness that is equally imparted by the on-the-fly, undercover nature of the filming.

Paradise premiered in the main competition at LOCARNO FILM FESTIVAL 2015 where this interview with Sina Ataeian Dena was taken.

Dana Knight: What was your creative process like working on this film? Did you start from a story or was it more character-based?

Sina Ataeian Dena: There was a kidnapping scandal 10 years ago, South of Teheran, and what was interesting about it was that this guy that in the end got arrested, was always there and he never caught anyone’s attention, he was always there playing with kids, then he would kidnap, rape and murder them. Horrible story. So this was the starting point but then we came to bigger concepts: violence in general, the abstract concept of violence. Then I decided to put the kidnapping story in the background of the film. When we had the first draft of the script it was very clear that we wanted to talk about violence in a wider sense. This type of violence, kidnapping and rape, is the physical aspect of it but there are non-physical ways to release and reproduce violence.

Knight: Although Paradise focuses on aspects of violence in Iranian society, at the press conference you pointed out that the film is universal in its themes, being a story about how we treat each other.

Ataeian Dena: Yes, the story is based on an universal concept in the sense that anything we do may have consequences for another person and the effect of that may be something we don’t necessarily want. And you have this kind of violence everywhere, in every human being and society, it’s a characteristic of the species and our interaction as a species.

Knight: Going back to your creative process, you said this project was a collaboration of several artists. Did you collaborate at the screenwriting stage too?

Ataeian Dena: No, I wrote the script alone. It was for the first time that I did not ask for the opinion of my best friend who is also my co-writer.

Ataeian Dena: Because this was a story I wanted to tell and I did not want to change anything  about it. Also during the shooting, my producer always had some different opinions about how to deal with the situation but I really insisted on what I wanted and at the end he told me he is convinced. Also during the editing, my co-editor always wanted to take out some frames but I really wanted to show it the way it is.

Knight: Could you talk about these areas of slight disagreement?

Ataeian Dena: First of all, not all of my colleagues knew that this was a feature film. Because I did not want them to have to share the danger and the responsibility with me. They did not have permission to shoot and if you take part in a short or documentary it’s ok. But for a fiction feature , it’s a sensitive zone. So not many of them knew what exactly we were doing. Also we had different versions of the script for different actors, for different colleagues who gave us locations, who provided cars and extras for us.  At the end I apologised to all of them for not being honest but I was in a state of mind where I had to tell this story and did not want to compromise. From a certain point of view, maybe it’s not really ok, but …

Knight: You probably felt it was what you had to do as a filmmaker in order to make this film.

Ataeian Dena: Yes, I felt that I was responsible to tell the story as it is. And it’s the first time that as a filmmaker I made something that is 100% my input, I’ll go to court with it for everything!

Knight: How did the collaboration with Dorna Dibaj come about, the Iranian visual artist who plays the lead in your film. 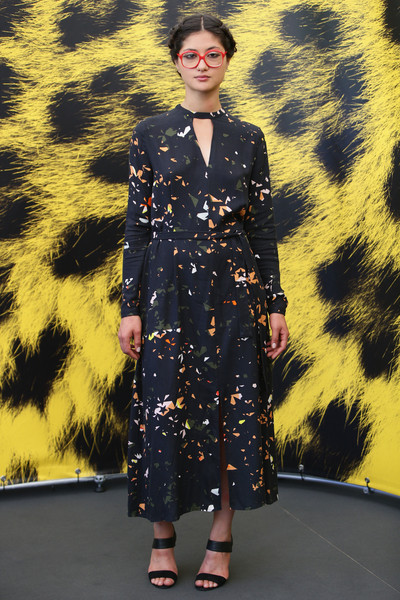 Ataeian Dena: I met her in a dentist’s office. She was sitting there and I asked her what she does, she said she studies art, sculpture, she makes statues. Then I told her about the project, she said she was interested, she seemed really excited. Then she went to a primary school in South Teheran for a year to teach these children and experience the atmosphere and catch the spirit of the whole thing. I was very surprised that she was willing to go through that experience, this showed me she is the right person to play this role.

Knight: Was it her idea or your condition for casting her in the role?

Ataeian Dena: This was my condition actually. It is difficult to work with me because I always need time. I need time and preparation and rehearsals. And I have some close famous actress who really wanted to play this role, they are like celebrities in Iran, which meant that they could have also brought money. But in the end I chose Dorna. Although she has no experience with film.

Knight: What acting instructions did you give her? Or was she very natural in front of the cameras?

Ataeian Dena: We had an amazing coach for her, my favourite Iranian actress, a real artist. She practiced all the scenes with Dorna, we had really long rehearsals, sometimes we invited other actors or actresses. We tried to do it in real locations, in real or similar conditions. Then when everything was ready we started to shoot for a few days. Then we had to wait for a few months to prepare everything again.

Knight: Are the pupils Dorna’s real pupils at the school where she taught?

Ataeian Dena: Everyone, except for the main protagonist, is a professional actor.

Knight: But not the children, the girls?

Ataeian Dena: No, we picked them. But for all the other roles, even very small roles, like one scene, I chose professional actors. I like this combination, the main character provides a fresh performance, it’s new and different from what you might expect. It’s also more believable, more real. I like working with non-actors. […] Also the cameraman, the sound technician, they had no experience.

Knight: That is a very risky choice, no?

Ataeian Dena: For me it is more risky to work with professionals if they are my age. If they are older and have a lot of experience, then yes, it’s easy to work with them. But not is they are around my age.

Knight: Why? Because of some kind of professional rivalry?

Ataeian Dena: No, I think this exists everywhere. I worked in Europe and I felt it was the same. Normally you have an easier relationship with people who are established professionals. It’s human nature. But when it comes to actors, it is a challenge to combine professionals with non-professionals, you need to balance their performances to have something smooth.

Knight: Considering how prominent Iranian cinema is and how high the expectations, was it difficult for you to choose a project to focus on, especially for your first feature?

Ataeian Dena: No, it was more like this: I normally have 5 or 6 different projects running at the same time in parallel and you give them a push for years and years and at some point you realise one of them is possible to do. So this was the first opportunity that arose for me.

Knight: I know you went to film school in Teheran and wrote a thesis on comic books and cinema. How did that come about, are you a fan of comic books? And did you take any insights from comic books that you could apply in cinema?

Ataeian Dena: I actually come from animation. I worked as an animator and visual effects supervisor in Iranian cinema. […] This thesis you mention is a rotoscoping film from 7 years ago. In this film I wanted to try out different ideas that you can develop in comic books but which are not in films. Also storytelling techniques and visual art things. It was for the first time that I showed something to a public and won some awards. It was a nice experiment. Because it is very difficult to finance a short film in Iran, even more difficult than a feature film. With a feature film you have some kind of idea of how to screen it or make money with it but for short films the financing comes from some governmental bodies and it’s not easy.

Knight: What directors do you admire the most in Iranian cinema and also world cinema?

Ataeian Dena: In Iranian cinema I like the New Wave Iranian Filmmakers. They are unfortunately not so well known outside Iran, some are but not everyone: Amir Naderi, he is a master of cinema, his film The Runner is like the Bible for me, it’s an amazing film. He lives in New York and makes films there. Also Shahid-Saless, he lived in Germany for a while. Parviz Kimiavi. Of course, Kiarostami.  I also like the Japanese cinema tradition very much, Yasujirō Ozu.

Knight: Are you already working on your next project?

Ataeian Dena: Yes, this film is part of a trilogy. We shot half of the first episode and we’re about to shoot the second episode.  All the films in the trilogy tackle the concept of violence in different aspects and from different perspectives, with a different cinema language.