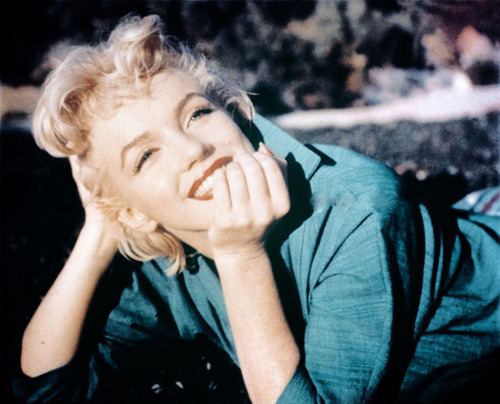 IF…If somebody asked you what Marilyn Monroe was really like, how would you answer them? And if you’re lost for words and can’t imagine what her inner world looked like, this film will help with shedding some light on that.

One of my favourite documentaries at London Film Festival 2012, LOVE, MARILYN is showing in UK cinemas until Wednesday 27 November, only one week left so don’t miss out…

Based on a bunch of recently-discovered personal documents that Marilyn left behind and drawing on a wealth of well-chosen film clips, archive footage and recent interviews with people who knew or worked with Marilyn, this is a truly mesmerising film in which the voices of a stellar cast – Glenn Close, Lindsay Lohan, Uma Thurman, Marisa Tomei, Viola Davis – mix to recreate one of cinema’s most fascinating movie stars.

Below is an interview with  LIZ GARBUS, the Oscar-nominated documentarist who put the many pieces of the mysterious puzzle together.

Dana: Where did this project start for you and what did you think of those documents when you saw and read them for the fist time?

Liz: The project started for me with the documents that were found. I made a film called Bobby Fisher Against the World and the producer of that film was an advisor to the Monroe estate which was entrusted to the Strasberg family. And much of it had been catalogued and archived and filmed but there were two boxes that were discovered in a storage closet, letters, notes, poems, and finally they decided that they should bring them out to the world. And my producer was helping them figure out what to do with them. And so when I heard about them I said: “Oh, I’d be interested in making a film”. And I wasn’t someone who was so interested in Marilyn Monroe but I wanted, you know, you hear about these documents and they started telling me about them and the kinds of things she was saying, and I found them irresistible, I found them really interesting.

Dana: How do you explain the phenomenon that was Marilyn Monroe? 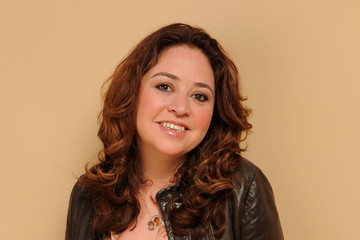 Liz: I explain it in terms of female sexuality and femininity at a time in the US of the great repression, it was the gray flannel suit of the1950s, when sexuality was bursting, it was trying to come out, and what happened is that it came out in the form of Marilyn Monroe. If you look at Marilyn next to Jane Russell, her co-star in Gentlemen Prefer Blondes, at Grauman’s Chinese theatre when they are doing their entrance, Jane is wearing this big 1950 poodle skirt, with a big collar and Marilyn, every contour in her body is showing, which I think is a metaphor for the generational shift that was happening at the time, but I think it’s naive or overly simplistic to say Marilyn was an early feminist. But what she did do was discuss sexuality…you know there were these nude photos that emerge of her, we are all familiar with nude photos today, then it was less frequent, but instead of doing what the studios wanted her to do and deny them and say it was somebody else, she decided to go out there and give an entry and say “Yeah it was me, and I did it because I needed the money”. She dealt with sexuality in a very frank way, that I think had an indelible mark on the culture and I think dying young and beautiful and that mythology around that tragic life story, the little girl who achieves everything and then at the height of it all dies, I think that is our modern myth, that’s our Cinderella story that has endured in our culture. And because she created it at this very particular moment, it was incredibly powerful. 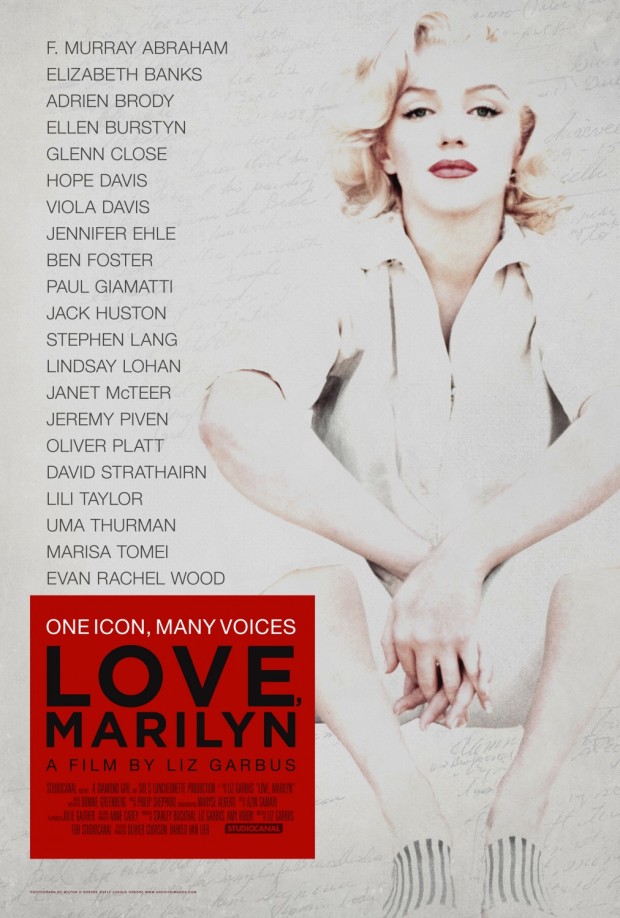 Dana: As you say, she’s got a very iconic image and we’ve all got a perception of her, how does this film go about changing that perception?

Liz: The perception I had of Marilyn before making this film was not incredibly deep, she was an image, a subject of still photography, I didn’t even think of her as an actress in her movie roles, I think I thought of the types of roles she played, the dumb blonde who was maybe a little wise but I didn’t think of her necessarily as a human being or as an actress, I thought of her as more of a model and an image, and with this film, in using the documentary letters that she left behind, provides the flesh of that person, and the viewers will judge for themselves whether it’s something new and different. For me it was, for me looking at her as a working woman who was having trouble balancing the demands of family and work, that’s a struggle that is relatable to modern women. That was the way I related to her that I didn’t expect to. So I think that there are things that are in the documents that I found that were different than what I expected, maybe it will be for viewers as well.

Dana: There seems to be a great focus on Marilyn this year. How would you say your film compares to or complements My Week with Marilyn in terms of the portrayal that they put forward?

Liz: Well, it’s very different, that film is based on a week, one moment in her life whereas this film deals with a much longer span of time, not her whole life but really the period that the documents come from, which is her adult life, pretty much, and they talk a lot about acting and her fears, they talk a lot about love and her struggles to balance that, include men in the life she had that was so complex and busy and public, […] and of course they are overlapping because they are about the same person. But I think one thing that happens when an actress plays Marilyn, even as superbly as Michelle Williams has done, you are always comparing her to the real person, so you’re watching Michelle in which ways she is and isn’t Marilyn. And whilst she is superb, she is not Marilyn, nobody is 100% somebody else. So the approach I took in the film is, we had a cast of actresses but none of them were playing Marilyn, what they were doing was using their own experiences as actresses working today to bring to life Marilyn’s experiences. They had insights into them that even I would rather document twenty times, they would understand that this was a note about an acting technique that to me it seemed like maybe it could have been from a dream or nightmare but it was about technique, they could understand these notes in a way that was unique and profound, so I think in the reading of them you do feel something more of Marilyn’s experience. And because they are not playing her, you’re not looking at them and saying “Oh, how was Uma Thurman like Marilyn, how was she not like Marilyn”, you’re just listening to the words and maybe feeling them more because you’re not constantly comparing.

Dana: Why do you think contemporary actresses relate so much to her, for instance Lindsey Lohan among others, is it to do with putting on the sexual character aspects of it?

Liz:  Yes I think it has to do with who Marilyn was sexually in our culture and that she was vulnerable yet powerful at the same time, things that are an incredibly powerful cocktail, that combination, and I think people like Lindsey have embraced that. And Marilyn died young and beautiful and she is the subject of much gossip and social speculation that never goes away, and the fact that people think there’s no definitive answer there which I don’t think is as as mysterious as everybody does, but it keeps the myth going. And she really is about the myth of celebrity, she really is about that eternal feminine vision and people wanted to buy into that.

Dana: What do you think of the way the industry relegated her to the category of “sex pot”/“dumb blonde” during her acting career?

Liz: I think that’s very unfair, you don’t create a figure that is so enduring if you’re stupid, she was very carefully crafted, there’s a biographer who talked about how she read the Times magazine, like she knew that in Italy there was this kind of busty, sexual female figure that was being embraced. So she adapted things from other cultures and she very deliberately created a new type of American figure. And that was quite brilliant. Maybe that’s giving her more credit, maybe some of it was quite instinctive but you don’t create that by accident, something very new and very different…And in the film we include a lot of her press conferences, and you see the way she talks to the press, she’s so clever, she handles the press so well, they are all trying to ask her these little zingers  and she deflects them very gracefully like a great politician. Her public persona was incredibly well calibrated and she was a master at it.

Dana: I read somewhere that she really liked to be photographed around books, is it true?

Liz: Well, I think that’s a bit of a cliché around actresses, they all like to be photographed with books but she was quite a reader, I mean everybody says she was, and I think that was part of the image she wanted to project.

Dana: What were some of the challenges involved in the making of this film?

Liz: Stylistically it’s very different than anything I’ve made before, and I haven’t seen a film like it, which is fine, we’re all filmmakers and are creating films, I was doing something that was risky, I had a whole bunch of different actors reading fragments, thoughts and ideas, and you had to edit them to become cohesive, yet still relish their fragmentary nature. I mean they are not meant to be a narrative, they are meant to illuminate moments in time and brief thoughts, some of them pleading, so the goal was to respect that as well as providing the viewer with a cohesive narrative, that’s a balancing act.

Dana: As far as editing is concerned, you’re pulling so many different cuts for this film, the letters, the performances, home videos, how difficult an editing process was it?

Liz: It was difficult, there’s always a time in editing, especially with a documentary because you don’t have a script, where you’re like deep in the woods and it’s very dark and you don’t know how you’ll find your way out, and because I’ve made some films, I’ve now come to embrace that period of like “okay, this is when it’s all happening, I know this feels like I’ll never find a way out but this is what has to happen” so I was there and I knew I would get through it and you have to constantly tell yourself that, sometimes all of a sudden there is a break and you find that things that won’t work, they work.