THE OUTRAGEOUS SOPHIE TUCKER is the rags to riches story of one of old time showbiz’s biggest personalities. From 1906 through the beginning of television, Sophie Tucker and her bawdy, brash, and risqué songs paved the way for performers such as Mae West, Marilyn Monroe, Bette Midler, Cher, Madonna, Lady Gaga, and Beyoncé. 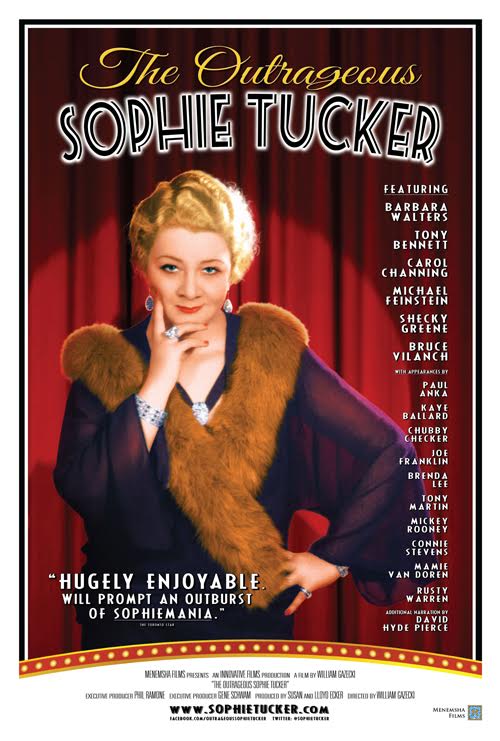 After eight years spent reading hundreds of Tucker’s personal scrapbooks, visiting fourteen archives, and interviewing dozens of family, friends, and fellow icons of stage and screen, Susan and Lloyd Ecker have completed their comprehensive documentary about the Last of the Red Hot Mamas.

“Sophie was like the Forrest Gump of the first half of the 1900s,” says producer Susan Ecker. “She was close friends with seven U.S. presidents, King George VI, young Queen Elizabeth, Charlie Chaplin, J. Edgar Hoover, Al Capone, Judy Garland, Jerry Lewis, Frank Sinatra and every other notable of her era.”

“After immersing ourselves in Sophie’s 400+ personal scrapbooks and meeting all of Tucker’s surviving friends and family,” says producer Lloyd Ecker, “this film biography is the complete uncensored tale of this vaudeville, Broadway, radio, television and Hollywood legend. Though she obsessively documented her life, Sophie loved to exaggerate for dramatic effect. Over the years, she told multiple versions of each important event. At the end, not even Sophie knew the difference between truth and tall tale”.

Sophie who? Wasn’t she the fat lady always singing “God Bless America”? (NO… that was Kate Smith). Like many people today, that’s who I thought of when I was initially offered the job of directing a documentary about Sophie Tucker. 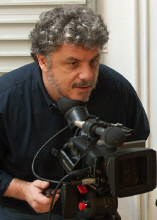 When Tucker was alive, she was indeed buxom, and somewhere in my mind I knew I had heard of her. One of those “tip of the tongue” memories. Later I realized it was probably from seeing a couple of Sophie’s 25+ appearances on the Ed Sullivan Show, the most popular of all the early television variety shows. Those were the days of my childhood when Elvis and the Beatles were thrilling me as a teenager. But Sophie was there too. As I would soon discover, throughout her life, Tucker was everywhere, like a real female Forrest Gump.

When I first met Sue and Lloyd Ecker, they kept me enthralled and intrigued with Sophie tales for hours on-end. I laughed, cried and was amazed… story after story after story… some funny, some touching, some unbelievable (for instance, Tucker befriended both gangster Al Capone and FBI Director J. Edgar Hoover). The Eckers knew Tucker so well, they spoke about her as if she was family. What an interesting and compelling life Sophie had. The kind of inspiring and iconic personality about whom you want to know everything. So I happily took on the project.

My first task? Find all the Sophie Tucker experts and get them scheduled for interviews. Unfortunately, there were no Tucker experts. Try as I may, no one on the planet knew as much about Sophie as Sue and Lloyd Ecker. Why? Because no one had ever done that much research on this forgotten icon. The couple had just completed four years of reading, scanning and indexing Tucker’s 400 personal scrapbooks, learning all the stories that in some instances spanned seven decades. They also spent an equal amount of time travelling throughout the U.S. and England interviewing and taping every person they could find who actually knew her. Most of them were successful retired performers who began as one of Sophie’s opening acts. None of them really knew her that well, being not much more than young upstarts when they worked with the “Last of the Red Hot Mamas”. But they remembered Tucker, and still loved her.

As they traveled on their “Sophie mission”, the Eckers had carried a video camera, shooting interviews with everyone they met. My second task was to watch all of these endearing recordings. Sweet as they were, mostly there was a dearth of unusable material for a traditional film biography. The stars had all been kids, impressed for life by a unique and powerful woman in the twilight of her greatness.

In the end, what seemed obvious turned out to be the best choice. The Eckers were the ideal candidates to narrate the movie. They had to be, or there wasn’t going to be a movie. “Let’s do a little experiment,” I said, and away we went. Fortunately, during their college years Lloyd had worked as a comedian and Sue as an actor. Once on-camera, they were wonderful. The rest is history, which you can now enjoy by watching “The Outrageous Sophie Tucker”!